What Jesus Really Says About Money 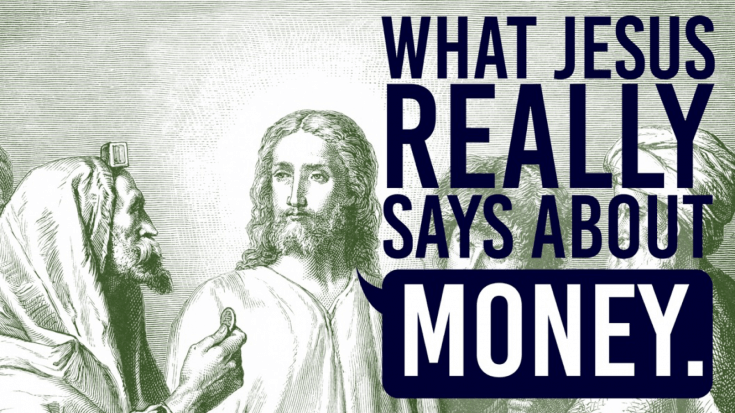 THE CHURCH AND MONEY

In the 1500’s, there was a theology–or a belief about God–called indulgences.
Some church leaders would say you had to give money to get God’s forgiveness.
Not only that, but give enough and you could send your deceased loved ones to heaven. And you would hear some church leaders say something to the effect of “as soon as the coin in the coffer rings, a soul from purgatory springs”.

But if you followed the money, you’d see the church got rich at the expense of people.
So if you’re hesitant to listen to what the church has to say about money, I can understand your skepticism.
You’re right to be skeptical of a church that connects wealth with God’s forgiveness.

In the 1950’s, there was a theology that emerged from good ol’ American capitalism called the prosperity gospel.
Some church leaders would say if you sowed a seed of faith, you’d see a greater financial return from God. A popular phrase at the time was “name it and claim it”. Just confess it and you’ll possess it.

But if you followed the money, you’d see the church got rich at the expense of people.
So if you’re hesitant to listen to what the church has to say about money, I can understand your skepticism.
You’re right to be skeptical of a church that connects wealth with God’s favor.

And so today, instead of half truths and twisted truths telling you what the church says about money, I’d like to talk about

What Jesus really says about money.

Because he was deeply concerned about money. Not just money. Your money.

And you are concerned about your money.

Even if none of that applies to your situation, when you think about money you still want one thing: more

what Jesus really says about money.

THE SERMON ON THE MOUNT

Now each week in these next four weeks we’re going to look at 4 of his teaching on money. There are dozens and dozens of recorded teachings we could look at but I really wanted to focus on four that deal with the concept of money more than practical spending advice. There’s a wealth of practical money management in this book, and later on I’ll get to how we’ll unpack some of that, but today we’re going to begin where Jesus begins.

This account comes to us from a biography of Jesus that’s in your Bible called Matthew, written by a man named Matthew who was a follower of Jesus and a former tax collector. So you can be sure Matthew was extra attentive when it came to listening to Jesus’ teachings on money.

Now this account comes in the very beginning of Jesus ministry. He had done a few miracles. Said a few inspiring and mysterious things. But he wasn’t at the height of his popularity yet. There’s a crowd in this account, but it’s a little more civil than the crushing pandemonium we see later on in his ministry. And this is Jesus’ first recorded public sermon. It’s famously called The Sermon on the Mount.

Here’s a picture of where it likely happened. I’ve actually been there. It’s a hillside that rises out of a lake called Galilee. So you can see the crowds there, the lake acting as a natural acoustic, and Jesus near the top teaching.

And as Jesus starts talking he’s like a new Moses on Mt. Sinai, giving new Laws for this new Kingdom he keeps talking about. It is an incredible sermon with so much content so I’m sorry to be rippin’ and runnin’ through it.

But he’s talking to a Jewish audience who loves them some Law. They love being better than others by how good they keep God’s Law. It’s become a source of pride for them to elevate themselves over other people. And for Jesus, he’s deeply frustrated by the way they keep the letter of the Law but miss the spirit of the law. Their behavior was right but their hearts were very, very wrong.

And so Jesus goes about dismantling their self-righteousness saying things like,

“You have heard that it was said in the Law, ‘You shall not murder…

“You have heard God’s law that says do not murder..”. And everyone listening in the crowd is like, yep. I haven’t murdered anyone. And he’s like,

but I tell you that anyone who is angry with someone will be subject to judgment.

“You have heard that it was said, ‘You shall not commit adultery.’

And everyone’s like, yep. Here’s my wife. I haven’t cheated on her ever. Puffed chest. And Jesus is like

But I tell you that anyone who looks at someone lustfully has already committed adultery in their heart.

And he keeps ripping and running through topics like this. Relationships. Enemies. Business. Prayer. Over and over he he cuts the legs out of err’body’s self-righteousness. He’s trying to show you need a Savior because your sin is bigger than your behavior, it’s a matter of your heart.

And so we shouldn’t be surprised–spoiler alert–when Jesus starts talking about money, he goes directly to the… heart.

So, relationships, enemies, murder, sex, family… then he gets to money.

19 “Do not lay up for yourselves treasures on earth,

No surprise yet. This is what you’d kinda’ expect Jesus to say. He’s probably not a very materialistic guy. But this is bigger than just coins and bills, he expands it…

where moth and rust destroy and where thieves break in and steal,

He expands treasure. If you can collect it, it’s a treasure.

20 but lay up for yourselves treasures in heaven, where neither moth nor rust destroys and where thieves do not break in and steal.

I saw this example years ago and I’ve never forgotten it.

Let’s say this rope is a timeline. Right here at the end is where your life began. This is where you had your first kiss. You graduated high school. Got a job. Had kids. And where you die. And your entire life is this little red part, right here.

But you are an eternal creature.

He’s like, y’all, it’s foolish to spend your treasure on this red part here. It’s foolish to break your back at a job you hate so you can retire and enjoy this little part right here at the end of the tape before you lose your senility.

Look at how long the rope is!

Invest in this. Not this. Store up treasure here. Not here.

I think part of the reason churches don’t like talking about storing up treasures in heaven is that we think people will misunderstand that heaven is something you earn. Heaven is a gift, not a reward or a purchase.

Fortunately, this is not the only time Jesus gives this message.

Later on, Matthew describes a time when a rich young tells Jesus he’s followed God’s Laws perfectly. Puffed chest. (Sound familiar?) And look how Jesus responds to this self-righteous guy like he speaks to the crowd at the Sermon on the Mount,

“If you want to be perfect, go, sell your possessions and give to the poor, and you will have treasure in heaven. Then come, follow me.”

When the young man heard this, he went away sad, because he had great wealth.

Now right away we start clamping down. We’re back in the familiar territory of church telling me to give them my money. But hold on. Before you start to question Jesus’ motives… follow the money. He just told this young man to give to the poor. Not himself.

In telling you to be generous, Jesus is telling you he wants for you what you want for you.

And this is the wisdom of Jesus. Because when you start a conversation on money by talking about giving, it’s the most-direct route to where he wants to take the conversation. Look what he says next,

21 For where your treasure is, there your heart will be also.

And Jesus isn’t saying don’t buy the new outfit or a nice bottle of wine for dinner tonight. [Hold up rope.] He’s saying start with your heart. Be aware that when you give to yourself you lead your heart towards yourself. You’re investing here. And when you give to cancer research or to clean water or to your friends or to your local church leads your heart away from yourself. You’re investing here.

Where your treasure is, there your heart will be also.

But that’s not all that happens when you give. There’s more.

In this entire Sermon on the Mount, Jesus isn’t asking you to do anything he wouldn’t do himself. He practices what He preaches.

God so loved the world that he… gave… his only begotten Son.
When he had given thanks he took the bread and he… gave… it to them saying, Take and eat, this is my body broken for you.
And when Jesus is on the cross, dying your death, he cried out in a loud voice and… gave… up his spirit. For you.

You want to know God better?

This is why Jesus starts the conversation on money by talking about giving.

And I would hate to let Jesus speak to you, to convict you to change, and then not give you the ability to change.

That’s why in the next four weeks we’re going to offer a course called Financial Peace University.

In just a moment we are going to collect an offering. And today, when you give, not only do you invest in services and programs at All Nations like youth mentorship and kids events and counseling services and recovery services. But when you give `I want you to see it as the opportunity Jesus promises it is.

Volunteers, will you please come forward?

Join us for our next large group gathering: Sunday, June 26th from 10-11AM